Pianist Annabelle Lawson has gained a reputation as one of the most dynamic and enterprising musicians of her generation. She has performed extensively and internationally, in venues including Wigmore Hall and Southbank Centre, has broadcast for BBC Radio 3 and national Australian radio and has released a critically acclaimed CD of new commissions with the Lawson Trio. 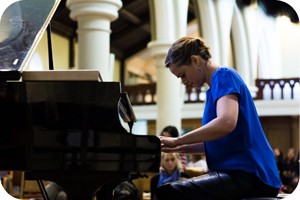 Annabelle teaches at the Royal Academy of Music in London, as well as examining for the Associated Board of the Royal Schools of Music (ABRSM), performing with the Lawson Trio and organising educational workshops and school showcase concerts as Artistic Director of Chamber Music 2000.

Please use the form on this website to contact Annabelle and she will look forward to responding to you.

“Annabelle Lawson gives a brittle, virtuoso performance, often tense and edgy, but always meticulous in its detail of the Sonata No.1 for piano. She is also the fantastic pianist in the two movement Trio for violin, cello and piano performed by her Lawson Trio… For me, the highly colourful intense music of the first movement suggested an eastern orthodox atmosphere but best of all, in the second movement, there was the dazzling mercurial piano writing which sounded so excitingly alive”
Alan Cooper, British Music Society, September 2019